Self-portrait in psychology: the 8 functions in painting and photography

Psychology of the self-portrait

When we speak of self-portrait in psychology, the interest is directed above all to the intentions that led the artist to reproduce himself.

One wonders what prompted the author to undertake such a difficult task and what the function of the self-portrait is for those who produce it.

The self-portrait is often a privileged mode of introspection and self-analysis: I retrace myself to dig inside myself, to look inside me, to understand who I am. Thus reflecting the author’s mind, character and personality, the self-portrait takes on the value of a privileged psychological document.

The general meaning of self-portrait in a man’s life expresses the need to secure oneself from death, to leave an imprint of our passage through life, to have concrete proof of the fact that “I exist”.

While among its functions we find: to block our image reflected in the mirror, to objectify the image to prove to exist, to give consistency to your body, to be able to observe and witness first of all is yourself to be there and to have a face; express through the representation of the body and face your own psyche, a certain state of mind or a feeling. Among the intentions of the self-portrait, there is also the need to rebuild or repair our identity and analyze the process that led to the construction of the image that we have of ourselves ( here you find an article that explains it).

The functions of the self-portrait between painting and photography

Let’s see together, analyzing some pictorial and photographic works, what are the functions of the self-portrait in psychology. 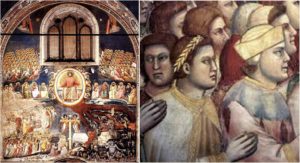 It’s the most common mode of self-representation in the early Middle Ages and the Renaissance. The painter plays the part of a character present in a story. In most cases, the self-portrait is identifiable because of some clues such as: the gaze turned to the spectator, is isolated in a privileged place, has a well-characterized physiognomy. The artist doesn’t like to portray himself and hides in his work, but being present is a way to sign his work and witness the presence in the described events. An example is Giotto who, in his work Giudizio Universale, 1306, inserts himself as the fourth person in the foreground into the ranks of the blessed, with a white cap at his head.

Self-portraits in the guise of others

Representing oneself in the guise of others can imply a process of identification with the chosen character and therefore have a certain psychological relevance. In this painting, Caravaggio self-portraited himself in the severed head of Goliath: the painting would have been made for Cardinal Scipione Borghese who was trying to obtain the pardon for Caravaggio, accused of murder and sentenced to decapitation.

The blade of the sword is engraved with the letters H AS O S, which would mean HumilitAS Occidit Superbiam (“humility kills pride”), a Latin quote from Saint Augustine.  With this phrase, Caravaggio would have indicated himself that he humbles himself to obtain grace. We can also speak of the double self-portrait of Caravaggio himself in the two protagonists: on the one hand, David represents the young painter Caravaggio, ideally portrayed at the maximum strength and proud, who instead kills Golia, the portrait of the old and decrepit painter, forced to flee because of the crimes he committed in his life.

In general, we often find in artists the desire to disguise themselves, which is linked to a deep need to experience everything and to be everything, the need to live a “plurality of lives” as Freud said.

In contemporary photography, we find Urs Luthi with his self-portraits 1969-1980 that realizes a series of self-portraits in the grueling attempt to immortalize the many aspects of an identity being defined.  He chooses his own body in his research and tries to demonstrate it as the primary field of his research. This artist wants to show and demonstrate how many identities can be contained in a single individual revealing, image by image, the multiple dark sides hidden but revealed through photography. 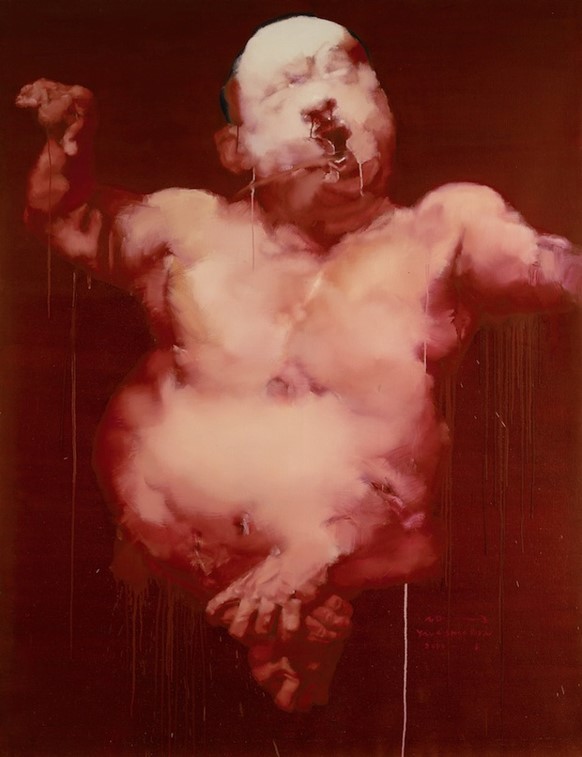 There are many authors who want to express an emotion or a feeling through the self-portrait. In order to represent a state of mind, the physiognomic criterion is often lost. I bring you the example of Yang Shaobin (1999-2000) who wants to represent his soul, wants to give a face to his inner world, to his mental state (anguish, scream, ferocity and oppression). We are faced with a self-portrait as an expression of the author’s psychicity.

Self-portraits can also be used to express man’s need to represent his inner world, his way of suffering and living emotions, his relationship with the idea of death.

In these cases, it is not faithfully reproduced the own image, but objects, situations or high people, on which the own emotional states are projected. This is the case of Van Gogh and his works.

The moment the artist identifies himself in an empty room, in a starry sky, in a flight of crows or in a field of wheat, he represents himself, projecting his emotional state. 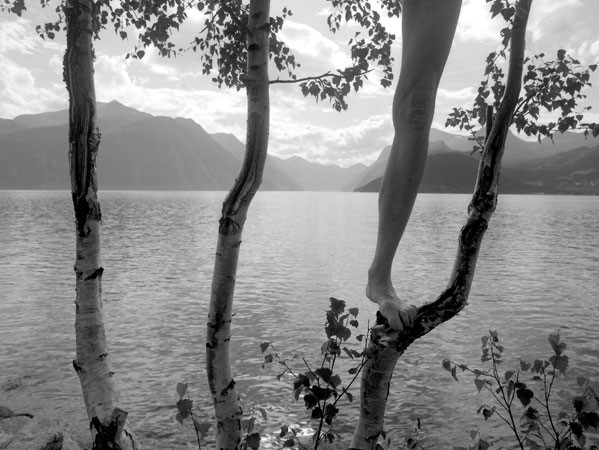 In this case the self-portrait is used as a tool to rework a trauma, to keep our identities together without masks, to reconstruct a fragmented image of ourselves, to find our relationship with our mother. Thus the act of self-restraint assumes the function of repairing our inner world.

An example is Arno Rafael Minkkinen who uses photography to repair a difficulty in the relationship with his inner image, conceals his face and exhibits the beauty in his body, creating aesthetically perfect photographs in which his body blends perfectly with nature. 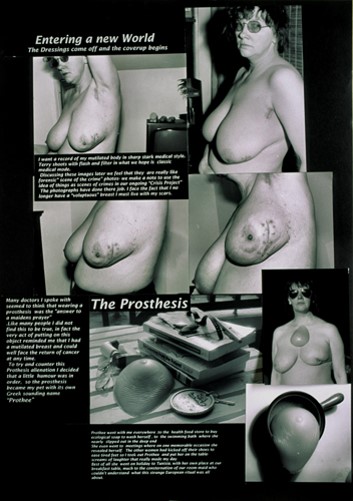 Photography is a powerful instrument by which you can emotionally process a distress or a problem. The first example dates back to 1970, with Joe Spence, a famous English photographer and activist whose work was considered the first example of therapeutic photography.  Having become ill with cancer, she decided to use photography to narrate what was happening to her both bodily and emotionally, exploring the theme of health and the image of herself. He has dealt with and elaborated suffering through photography. To learn more about therapeutic photography, you can read this article.

Self-portrait as a grieving process

Photographs can be used to begin processing the loss of someone or something. Here I bring you the example of a photographer, Moira Ricci, who lost her mother unexpectedly. Just after her death, she decided to take all the photographs of her mother, even those where she was not yet born because she felt the desire to go back and go in that time of the photo to tell her to be careful about what would happen that damn day. Through this work, Moira psychologically encounters the emotions that will allow her to begin the grieving process.

There are many examples in the field of painting or photography that testify the use of self-portrait as an introspective means capable of telling the artist’s inner world.

Studying self-portrait in psychology gives us the opportunity to enter the mind of the artist and understand in-depth his psychological aspects in relation to his works. In the end, I believe that the beauty of art lies precisely in grasping the psychic and therefore profoundly intimate aspects of the authors of works.